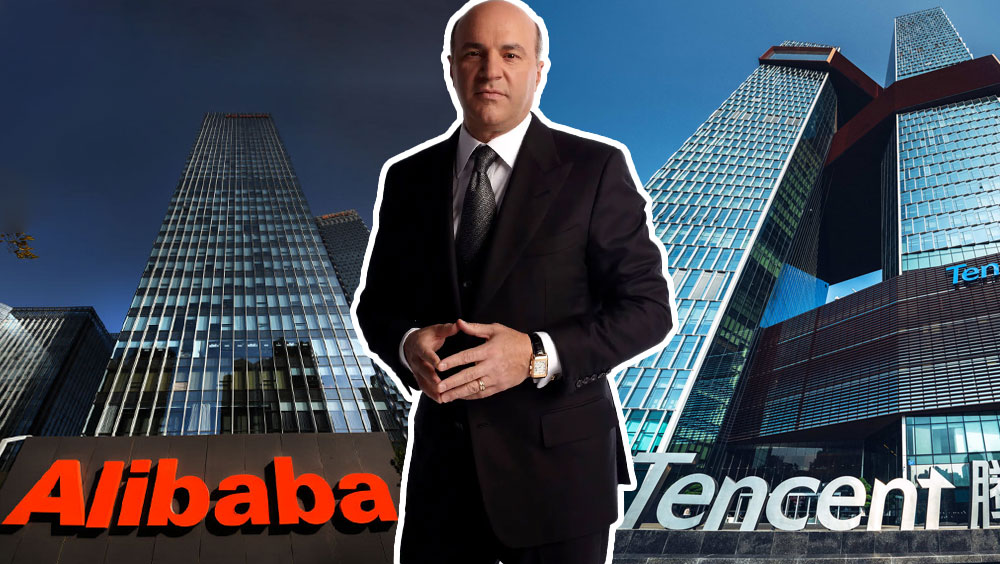 American equity investor Kevin O'Leary has been taking a lot of chances lately, but his recent plunge into buying into Chinese giants Alibaba, Tencent, and Meituan may be his biggest roll of the dice yet. Following recent declines in the Chinese market and a downgrade in market cap from analysts at JPMorgan, the chairman of O'Shares ETF and star of Shark Tank announced on March 14 that he has shifted considerable resources into the three ailing companies.

Shares of Alibaba jumped by 37% the next day, reversing more than a week of declining prices. O'Leary stated on CNBC that the JPMorgan downgrade, which moved Alibaba's target price from $180 to just $65, was a "buy signal." The veteran investor then facetiously thanked the analyst for moving Alibaba stock by 7% in a single hour and letting him "buy on the dip."

Kevin O'Leary has a history of surprise investments that leave others in the market wondering what he's up to. As late as February 2022, O'Leary was promoting the future of European energy ETFs, until the Russian invasion of Ukraine cut supplies and drastically reduced the ability of oil and gas to reach their markets in Europe. O'Leary's O'Shares ETF has also recently taken the long position on Meta, the embattled successor to Facebook.

The recent purchases have made O'Leary a major shareholder in Chinese online retail giant Alibaba, the technology firm Tencent, and Meituan, which is usually described as the Chinese Uber. All three firms are under the control of Chinese billionaire Jack Ma.

Ma's recent personal issues have been blamed for much of the months-long decline of his companies' stocks. In 2021, the chairman mysteriously disappeared for three months, sparking fears he may have been arrested by the People's Liberation Army. Ma eventually resurfaced, seemingly free and able to return to his work in October 2021, but he has presided over a steep decline in his companies' valuation.

Further hardship has affected Alibaba with the restrictions of China's "zero-tolerance" policy toward COVID-19. This policy, which has seen massive lockdowns in Ali and Tencent hub city Shanghai, has driven a 40% decline from the peak in September 2021.

Making matters worse, Beijing authorities have extended their anti-corruption campaign into the volatile Chinese stock market with a list of new reporting requirements many believe Alibaba and Tencent will struggle to meet. Chinese regulators have threatened to delist companies that don't meet the 90-day deadline they've set. Speaking with CNBC, Kevin O'Leary insisted that the fundamentals of the companies were strong enough for serious upside potential. Prices continued to rise until May 5, when Alibaba's stock suddenly lost $26 billion on a rumor that Jack Ma had been arrested again.